A Closer Look at Skincare Through the Decades

Home » A Closer Look at Skincare Through the Decades 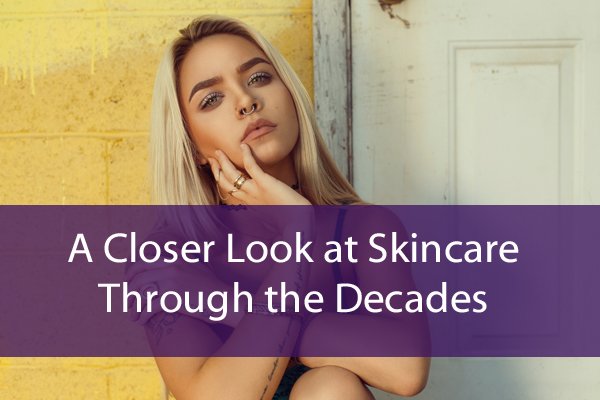 For thousands of years, women have been using cosmetics such as creams, powders, and scrubs to keep their skin looking clean and healthy. As far back as the ancient Egyptians, we see evidence of elaborate skin care routines designed to keep women looking their best as they age, but cosmetics back then weren’t always made of the safest or most palatable ingredients. Luckily, our cosmetics have greatly improved since the time of powdered lead eyeliner and crocodile dung face masks. The 1900s saw an increased interest in health and well-being among the general public, while the FDA began regulating a health and cosmetics market that was rife with unscrupulous salesmen pushing products containing toxic chemicals and dangerous drugs.

In the past couple of decades, cosmetics have become safer, more effective, and more widely accessible to everyone from homemakers to businesswomen.  From the 1970s onwards, the world of skincare has been evolving to help women look good without damaging their body.

The 1970s emphasized natural beauty, encouraging women to either go without makeup or wear subtle nude shades. Flowing hair and a toned body were in, instead of the curvy figures popular in previous years, partially due to the popularity of icons like Twiggy. Tan skin was also popular, as it was viewed as projecting a healthy glow, but many people weren’t aware of the dangers of tanning. Sunscreen with UVA/UVB protection wasn’t widely available until the following decade.

Female athleticism became popular in the 80s, with women aspiring to a lean, strong figure like “Hardbody” Jane Fonda. Clothing, as well as makeup, became bolder and more vibrant. Thick foundation and heavy eyeshadows were all the rage, but they often weren’t breathable and could take a toll on the skin. As a result, more cosmetic creams and multi-step systems began hitting the market geared at removing makeup and keeping skin clean.

While thin was still in during the 1990s, less of an emphasis was placed on toned or well-built muscles. Models such as Kate Moss popularized a skinnier, more waif-like appearance than the hardbodies of the 80s. Clean, smooth, creamy skin was in style, in part because of more photoshopping of faces in magazines, along with matte makeup and gentle tones.

In the 2000s, the rise of the body acceptance movement has brought curves back to the forefront of the fashion world. Natural beauty is back in style as well, with many women switching to cosmetics with simpler, safer ingredients. Women are also starting to think in the long term when it comes to skincare, using anti-aging creams with moisturizers and retinoids that keep skin looking younger.

Subscribe to our newsletter and receive exclusive offers and discounts